Staying Up to Code and Safe with Emergency Signage

Emergency signs are a must for every building. Get to know the most important things about Exit Signs, safety, evacuation signs and more.

Staying Up to Code and Safe with Emergency Signage

In an emergency, someone unfamiliar with your building will likely look for the familiar lit exit sign first. But did you know there are minimum code requirements for those exit signs? The National Fire Protection Association requires either an internally illuminated sign wired into your emergency power source, a sign that’s electroluminescent, or a sign that’s self-luminous. The idea is that the sign must be powered, and must not rely on light bulbs. Traditional signs and printed signs on doors won’t keep you up to code.
In addition, if there are any doors that could be mistaken for an exit, they must be identified with “No Exit” signs. On top of that, remember that any additional signage must also comply with ADA (Americans with Disabilities Act) requirements. That means raised characters and braille, a non-glare finish and high contrast for visual characters and pictograms. These requirements are all to ensure that the visually impaired are able to get the necessary information from your emergency signage. It may also be necessary to print this information in multiple languages if your facility is multilingual.

Once you have the signs made appropriately, placement is also important. Tactile characters on signs must be located at least 48 inches off the floor. If your sign is next to the door, it must be on the same side as the door’s latch. This ensures people with vision impairments know exactly where to look for the signage they can interact with. When you’re thinking about placing emergency signage, you can’t just think about who’s already in your building – you have to think about who’s going to be coming in as well. Emergency personnel needs to know if there’s a fire near a room full of compressed oxygen, for example. Pointing out potential hazards for emergency personnel is a small step, but a potentially life-saving one. 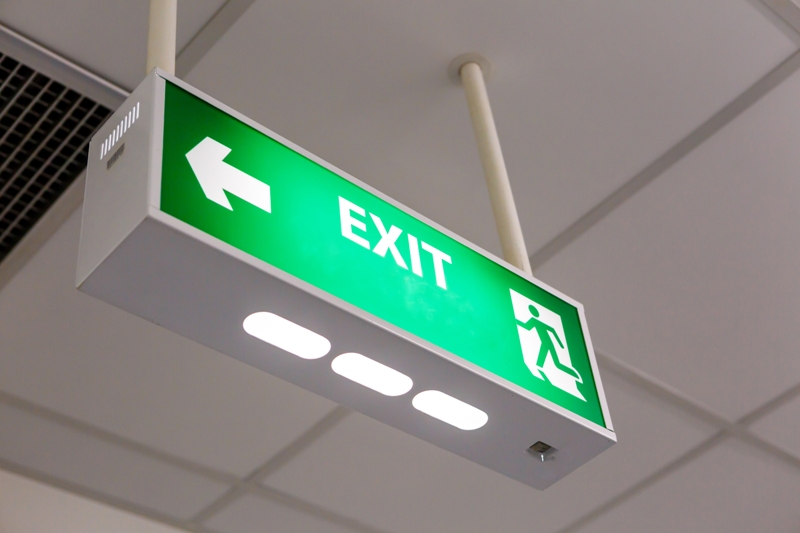 Where is your evacuation plan located? Do you have one mounted on the wall? On a sign? Do your employees know where it is? Unlike many emergency signs, evacuation plans don’t have elaborate code requirements. But they are still an absolute must to have. A popular strategy is to supplement a large, permanent evacuation plan map with several smaller, printed ones that can be taken along with the evacuees, or used by emergency personnel to sweep the building. However, should you have a wall-mounted map, be sure to check it frequently for accuracy. Even if the layout of your building doesn’t change, the preferred evacuation method might.

There are a lot of things that go into emergency signage, and hopefully, nobody in your facility ever has to seriously use it. But if something happens and that signage is necessary, it can be the difference in saving lives.
Ensure that your emergency signage is readable – even by the visually impaired – and that it points out both routes to safety and potential hazards on the way. Doing that will ensure your building is up to code, and the people in it are as safe as they can be.